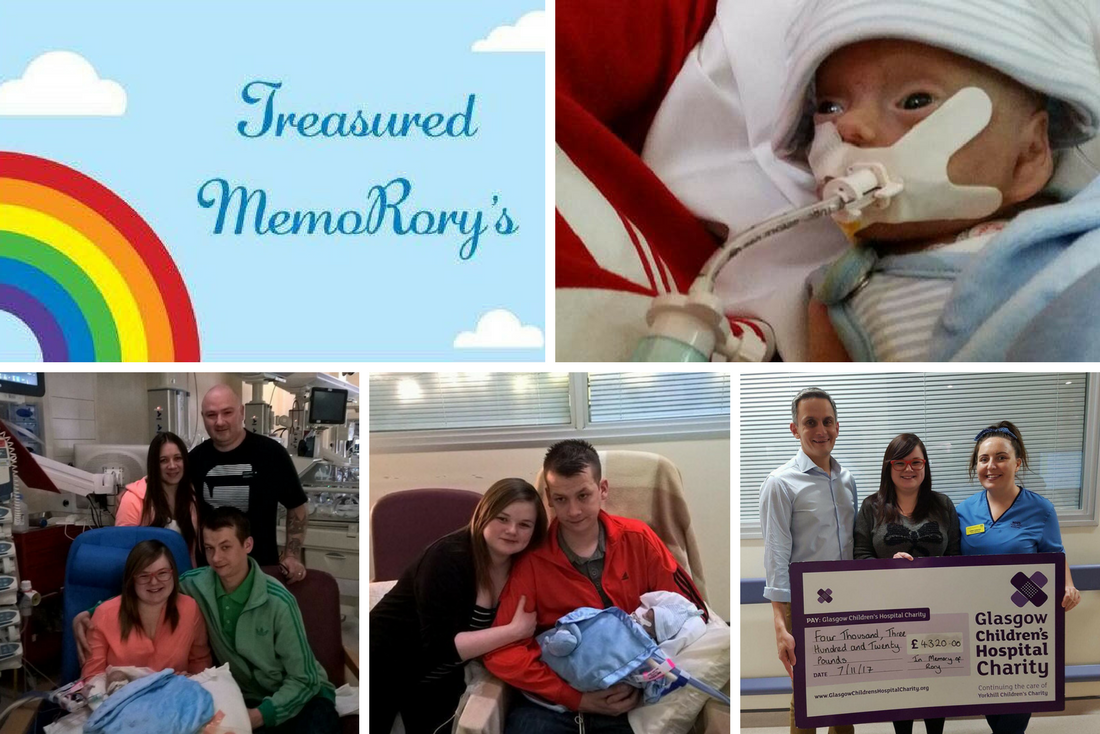 In October 2017, vCreate welcomed our first ever sponsor, Treasured MemoRory’s.

Thanks to the charity’s founder, Stephanie-Jane Taylor of Irvine, North Ayrshire, over 190 families have now received video updates of their child from the Neonatal Unit at the Royal Hospital for Children, Glasgow.

In this moving interview, Stephanie-Jane shares her story, including how Treasured MemoRory’s came to be, and why she chose to fund vCreate for RHC NNU.

I was born with a congenital heart defect and have undergone numerous surgeries and hospital appointments throughout my life. In October 2015, my partner Scott and I discovered that we were going to be parents, and, although a happy surprise, I was concerned and unsure as to how my medical condition would affect the pregnancy. I visited my local hospital and was advised that choosing to continue with the pregnancy could pose a serious risk to my life, but there was no doubt in my mind that I was going ahead with it.

I attended regular hospital appointments for me and my baby every other week and on the 8th of February 2016, I was told I needed to be admitted as my heart wasn’t coping well. I was only 19 weeks pregnant at this point so it was a very scary time. On the 5th April, when I’d spent 8 weeks at the Golden Jubilee Hospital, I was taken to theatre for a C-section, and baby Rory entered the world at 27 weeks, weighing just 1lbs 9oz.

Rory was immediately transferred to the Neonatal Intensive Care Unit at the Royal Hospital for Children in Glasgow to receive special care, whilst I had to stay at the Golden Jubilee for my own health for a further two weeks. Being separated from him was extremely upsetting, but the hospital set up a video link so I could see Rory and speak to the nurses caring for him. It wasn’t ideal but it was better than nothing.

Rory fought very hard throughout his short life, but sadly he was too ill and passed away in my arms on the 5th of May 2016 at just four weeks old.

We had painted Rory’s bedroom blue ready for his arrival, so when I came home from the hospital, I didn’t want it to sit empty but I also didn’t want to change it. I decided to display some of his things, his vest and cardigan in a frame; I also made a frame for my mum with a vest, hat and photos of him.

Everyone who saw the frames commented on how nice they were and so Treasured MemoRory’s was born. I would make personalised boxes with photos or items to keep as a memento, sell them from my Facebook page, and donate the proceeds to the Glasgow Children's Hospital Charity, the charity for the neonatal unit that cared for Rory. To date, with the support of Scott and Rory’s Grandparents, Lizzie and Andrew, we have raised over £10,000 from a collection at Rory’s funeral, holding fundraising events such as golf days, packing bags in supermarkets, and selling my personalised photo boxes and frames.

Last year, when we were presenting a cheque from one of our fundraising events to Aileen McConnell from the hospital charity, she and one of Rory’s Doctors, Dr Judith Simpson, told us about vCreate being trialled on the unit. They asked if it was ok with us if some of the money we had raised went towards it. I decided then that we would like to fund it outright as it would be great to put Rory’s name to something that would have helped me when I was in the hospital.

The live cotside video camera was ok, but as I was still recovering, I was unable to spend whole days in the hospital, and when I was at Ronald McDonald House, I couldn’t view the video link. It would have been amazing to receive video updates of Rory to my own phone, and have them as a keepsake. To be able to fund a valuable project like this that will help so many parents is just amazing, and the feedback we have heard is fantastic. Our aim is to help families that find themselves in a similar position to the one we were in, and to keep our precious Rory’s memory alive.

For more information about Treasured MemoRory’s, head to their Facebook page.