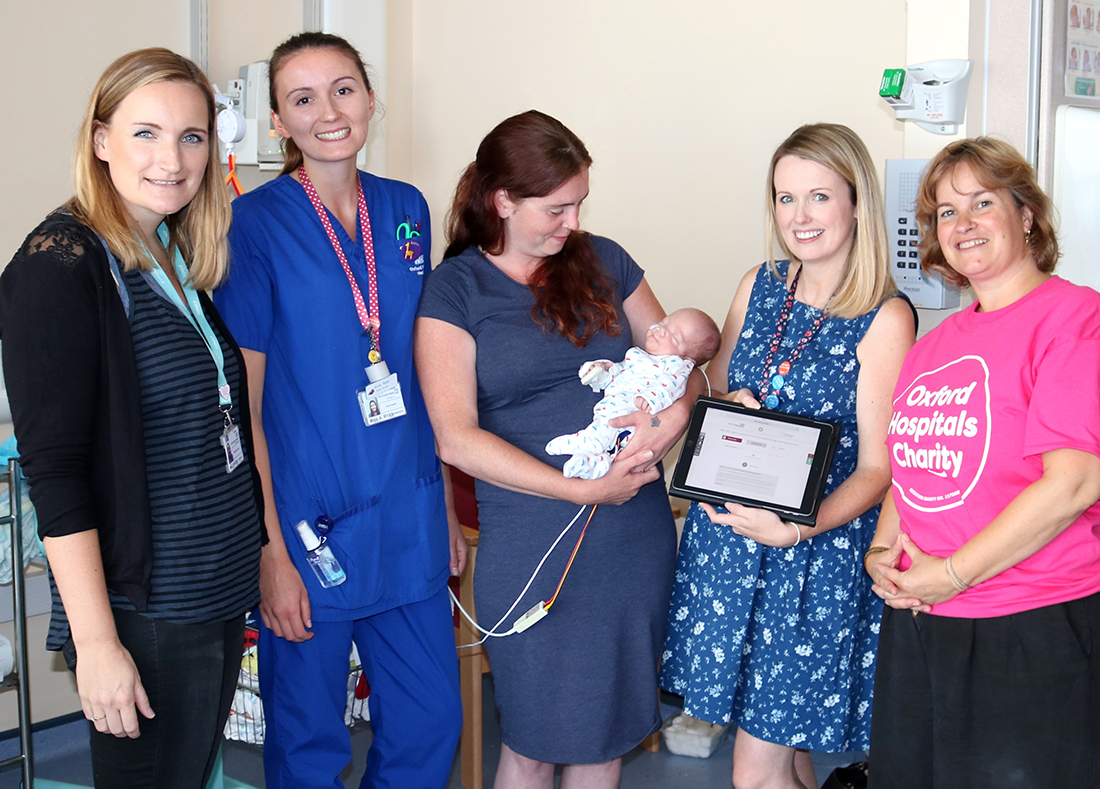 A pioneering project is helping parents with poorly newborns cared for at the John Radcliffe Hospital to watch their babies' progress, even if they are unable to be at their cotside.

The vCreate App, launched at the Oxford hospital yesterday, Tuesday 17 July, allows nursing staff to record videos of babies in their care.

Videos are sent securely to parents’ smartphones and tablets and, over time, a video diary builds up that can be downloaded and kept forever once the baby has been discharged.

Dr Jacinta Cordwell, Senior Clinical Psychologist at Oxford University Hospitals NHS Foundation Trust, said: “Being separated from your baby can be incredibly difficult for any parent, especially when your baby is sick or premature.

As a team we were keen to think of ways that we could bring families and their babies closer together.

We hope that implementing this video messaging system will provide parents and families with some comfort and ongoing connection to their baby when they are otherwise not able to be by their cotside.”

Dr Cordwell was motivated to introduce the system based on her own experiences of different systems available to nurseries and preschools.

One of the patients to pilot the new technology ahead of yesterday’s launch was 31-year-old Sara Deans from Banbury, north Oxfordshire.

Her son, 14-week-old Frazer, weighed 1Ib 8oz (835g) after being born at 24 weeks, and has been battling complicated medical issues at the Newborn Intensive Care Unit at the John Radcliffe Hospital since April.

Sara, who jumped at the chance to pilot the free app, said: “As soon as I was told about the app I said it was a brilliant idea. It’s so nice that when I leave the unit, instead of ringing, I can physically see him.

The nurses are great. I went to the dentist recently and one of them had written a note saying ‘mummy be brave at the dentist today, love Frazer’. It was so cute.

vCreate has been so beneficial and is so appreciated. I 100% recommend it.”

Emma Cantrell, SSNAP Charity Director, said: “SSNAP is committed to working closely with the Newborn Intensive Care Unit in our joint aim to enable families to spend more time with their baby and to reduce parents’ anxiety when they can't be physically present.

Thanks to the generous donations of families who have gone before them we are very glad to be able to fund this fantastic app to help parents feel better connected to their baby when they can't be cotside.”

For parents of premature and poorly babies, keeping constantly in touch with their little one’s progress and feeling involved in their care provides reassurance and minimises separation anxiety during a very difficult time.

It also allows wider family members such as siblings and grandparents to be more involved. So we are delighted that we have collaborated with Newborn Care team and SSNAP to support this very special project.”

Ben Moore, Founder of vCreate, added: “The launch of vCreate in the Neonatal Intensive Care Unit at the John Radcliffe will provide a massive boost to worried parents who aren’t able to be in the unit 24/7.”