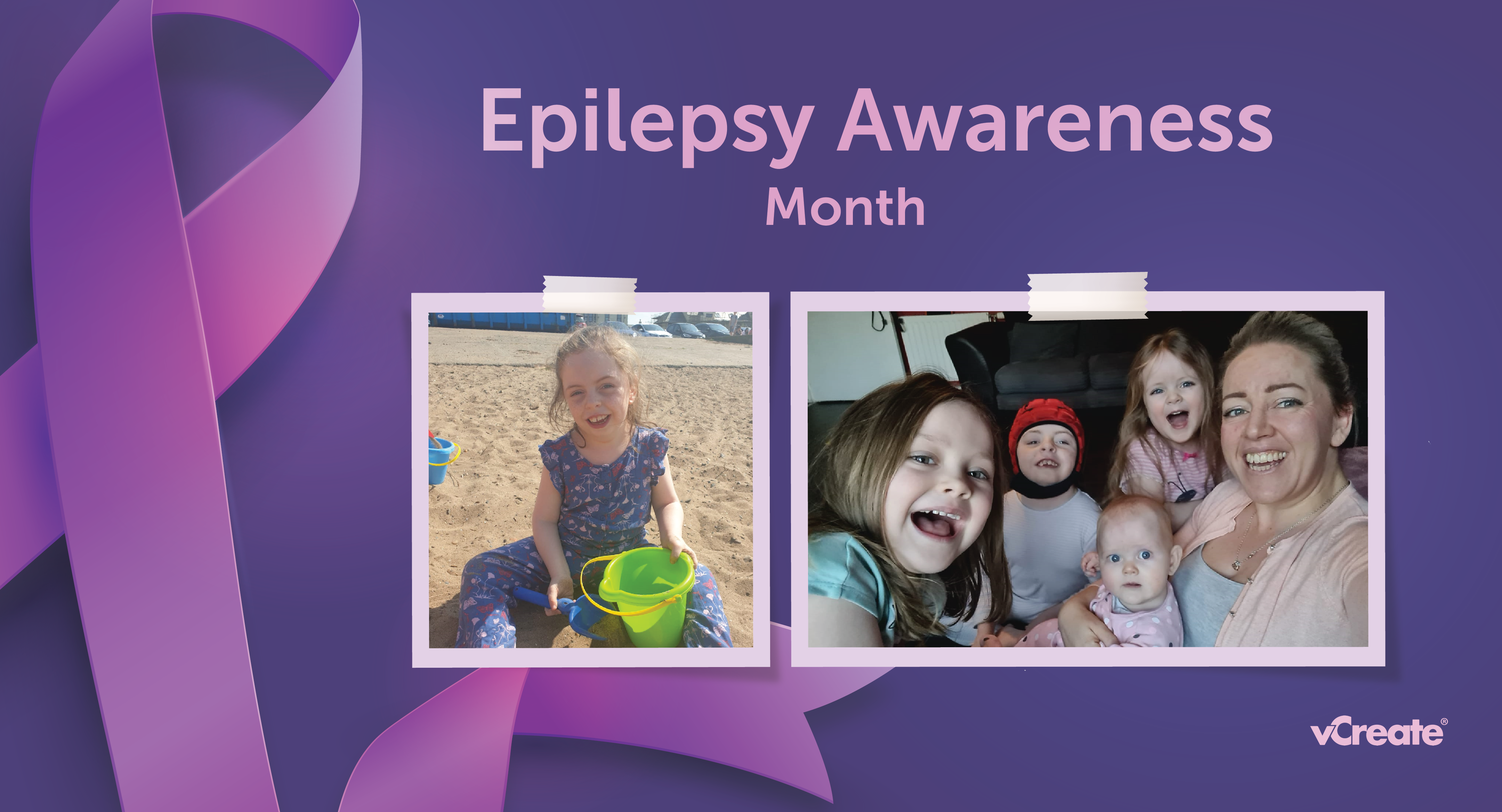 This Epilepsy Awareness Month, we were humbled to speak to the Pender family about their experiences with epilepsy and how the condition has impacted their lives since daughter, Hannah, was diagnosed at 3 years old.

Rebecca Pender, mother of 4, was kind enough to share their story with us and offer advice to other parents who may be going through similar journeys.

"Our family has a history of febrile seizures, and I myself experienced them until I was 9. When Hannah was a small baby, my own mother sat me down and explained she was likely to have a predisposition to febrile seizures due to our family history and coached me on what to do if any of my children ever had one.

Hannah’s epilepsy journey began shortly after her 1st birthday when she had her first seizure. I was as cool as a cucumber during it, thanks to the conversation with my mother, and we went to our local A&E. We were sent home after a few hours but returned again the following morning after she had a second febrile convulsion within 12 hours of the first. Despite reassurances from medics, I requested, and was granted, a referral to the children’s neurology team. In what I now see as fate, we were paired with a neurologist who has a specific interest in genetic epilepsy.

Hannah lives with two rare genetic conditions: inverted duplication and deletion of the short arm of chromosome 8 (inv dup del 8p) and a gene mutation of SCN1B located on chromosome 19. She is one of the only children in the world with both.

Part of Hannah’s presentation means she lives with Lennox Gastaut syndrome (LGS), a rare form of severe childhood epilepsy which is usually resistant to treatment and there is currently no gold standard of treatment.

Hannah presented with febrile seizures when unwell and, age 20 months, aspirated during a prolonged 45 minute febrile convulsion and spent 5 days on life support before making a full recovery. We trundled on over the next few years, dealing with seizures only when fevers arrived and became adept at heading them off before they took hold. However, sometimes the seizures would present anyway and would always be prolonged. Her record is 1 hour and 45 minutes – what felt like a lifetime.

On Valentines Day 2016, a M&S Dine in for Two in the fridge, Hannah, now age 3, suddenly dropped to the floor, looked dazed then got right back up again and carried on. This happened a few times over the course of a few hours and then her arm shot up in the air and started moving, seemingly of its own accord. She looked petrified.

With our Valentines dinner moved to the freezer, we headed off to hospital where the ‘episodes’ became more frequent and started involving other limbs and more ‘drops’. Admitted to the neurology ward for observation, Hannah then had 2 back-to-back tonic clonic seizures and was given an official diagnosis of epilepsy as there was no fever present.

This was in some way a relief as it meant we were being heard. I believe getting such [an epilepsy] diagnosis shouldn’t be seen as a negative thing, it’s a key to treatment, support and information. It opens doors to enable children like Hannah to get the support they need to be the healthiest and happiest versions of themselves.

On medication, she was well controlled and even went 17 months seizure-free until she was almost 7 years old. Then things took a turn. We added in other medications to try and control things but, no matter what we tried, more seizure types began to present.

The list grew to include absences seizures, drop seizures, myoclonic jerks, focal aware seizures, focal with impaired awareness seizures and finally Non-Convulsive Status Epilepticus. NCSEs are prolonged states of seizure activity with impaired awareness. For Hannah, this meant the loss of her hard-won speech, her ability to move independently, her ability to swallow and interact – it was the thief of her sparkle and crumbled our joy. Each medication we tried either didn’t help or worsened things significantly.

Would you believe me if I told you that Hannah was 7 years old before we managed to capture a seizure on EEG? Her diagnosis and our ability to share what was going on with her epilepsy team relied on us being handy (and quick) with our smartphones and taking videos to show them and uploading them directly to vCreate.

I was exasperated at the end of 2020 when she had 120 tonic clonic seizures throughout the year and 2 episodes of NCSE. She was exhausted. We were exhausted. Nothing was working.

In April 2021, she was hospitalized due to yet another episode of NSCE, this one lasting 9 weeks. She was permanently tachycardic and was unable to function to even a basic level outside of lying down and breathing. She had a heart rate of 140 bpm while asleep. We were dealing with up to 10 tonic clonic seizures per day and she was slipping away from us. She had everyone stumped.

All the usual treatments were not working including Keto diet and I started questioning the medicine that I had been such a supporter of. Was this one too high? Was it at toxic levels? One day while at home tending to my other children, I dropped the pile of items in my hand and had a eureka moment. I had long kept a seizure diary charting all her seizure types with dates but had never compared it with her medication changes until now.

As I started writing and comparing, one thing became startingly obvious: every time one particular medicine was increased the seizures flared up. I compiled all the dates and went to hospital to present my evidence to her doctors and they agreed to try, so that evening we halved her dose. The next morning? Hannah was awake, she was bright, interactive, giggling – her sparkle was back!

During this admission, her neuro team requested we look further into genetic testing which highlighted a mutation in her SCN1B gene. This diagnosis revealed that her medications were counteracting with each other. My gut had been right and now the science proved it!

Since stopping that medication, we haven’t had another episode of NCSE, however, we are still dealing with multiple seizures. So far this year, she has had over 500 tonic clonics and she stops breathing during most of them. Our home resembles a small clinic with the lifesaving equipment and medications, but it means we can look after her at home more often.

Our family has become so accustomed to dealing with epilepsy on a daily basis that even my 6-year-old knows all the correct medical terms for seizure types. It’s part of our daily lives.

We are incredibly lucky to be under a team with a specific interest in rare epilepsies who work with us constantly to tweak her care plan to give Hannah the best quality of life as we can. They revel in her triumphs with us when times are good and worry about her when she’s very poorly.

Perhaps as science advances and more research is done there will be more treatment options available to us but in the meantime, we live in the moment and make as many memories as possible with Hannah and her three younger sisters because tomorrow isn’t promised and epilepsy can be cruel.

My advice to other parents who may be going through a similar journey is never give up hope. Research and science are advancing all the time. Forge connections with other families going through the same thing and build a circle of support. Make all the memories you can as tomorrow isn’t promised. Don’t live in fear of the ‘what-ifs’. Soak up every moment of joy that you can.

Having contingency plans is a must, but don’t let it stop you from living. I saw a quote recently from another epilepsy parent which read 'She [her daughter] could have a seizure at home or at the beach, so she may as well have the seizure at the beach.'

Our family has tried to live by that sentiment since."

Thank you so much to Rebecca and her family for sharing the ups and downs of Hannah’s epilepsy journey!

An epilepsy diagnosis can be difficult to obtain and life-changing when given but there is hope at the end of the tunnel. As Neurologists move forward with research and innovation in the field, we get closer to discovering treatment that can help children like Hannah keep their sparkle and live a happy, healthy life!

As the most common neurological condition in the world, there’s still so much we don’t know about epilepsy but we’re honoured to be helping the community search for answers.