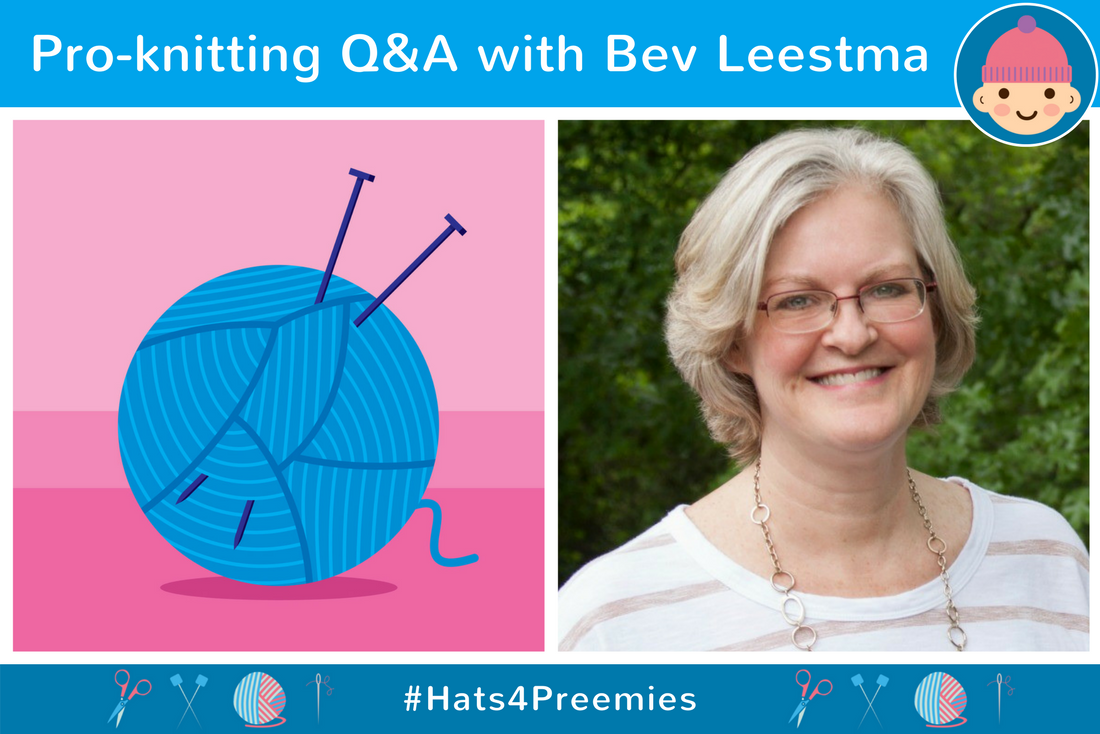 This week, as part of our ‘Make a Hat for a Preemie’ campaign, the vCreate Team caught up with pro-knitter, Bev Leestma, from The Make Your Own Zone to pick up some expert knitting tips and to find out what drives her to do what she does. Bev, who is based in Michigan, knits hats for newborns and donates them to the maternity and neonatal ward at her local hospital.

Tell us about you

I first learned to knit in the fifth grade when my school teacher offered to teach those, who were interested, some knitting skills during our lunch hour, and I've been a faithful knitter ever since! I've always loved combining colours and watching projects take shape as you keep knitting the rows. Some of my favourite projects have been those that use up leftover yarn by combining them into colourful patterns.

How did you first come to knit hats for newborn babies?

I first knitted some baby hats when a local yarn shop had a list of charity knitting projects where you would knit items and drop them off at their store, they would then deliver the items. Baby hats were on their list, and I remembered how much I liked the hats I received from the hospital when my two children were born, so I decided that was a project I could work on for donation. However, I couldn't quite find a pattern I liked (and I had saved my kids' newborn hats from the hospital as keepsakes) so I dug them back out and used them as templates to make my own pattern. They worked up quickly and were fun to make, it was the perfect project that I could make in an evening while watching television!

What do you think makes the perfect hat for a preemie?

The knitting pattern I use makes a very small hat, (about an 11" circumference) and sometimes people think they are too small when they first knit one; however, they are intended for the newest of new babies who are just born. They can outgrow them quickly, sometimes in only a few weeks, but the purpose is to keep the very newest and smallest babies warm. Both of my babies were born during cold winter months, and the free hats I received at the hospital were very, very useful during those first few weeks with a new baby during the snowy time of the year.

I haven't been able to do too much charity knitting lately, but I've been blessed to be able to do a bit of knitting for my grandchildren. Each of them received a new baby afghan from me when they were born, and I've made a cute little baby sweater for my granddaughter too. And of course, I made them some newborn hats!

What are your 'most requested' knitted items from NICUS?

One of the most recent requests I received was the rather unusual request for a "knitted knocker", a soft type of knitted insert for women who have had a mastectomy. I was happy to help :)

What would you say is easier, crocheting or knitting?

For some reason I've always preferred knitting over crocheting, although I have also done crochet projects. I've always found that knitting with two needles was a little easier for me to hold in my hands, rather than the way one needs to hold a crochet hook. However, I've been very intrigued by some of the "NICU Crochet Octopus" patterns I have seen around and might just have to dust off my old crochet hooks and try crocheting again!

What is it you like about knitting and making?

I'm quite sure knitting will be something that I continue to always do and love. There's something so satisfying about creating a useful item from nothing more than balls of yarn and a couple sticks. It's almost magical to watch a project come together and something I never grow tired of.

Sure thing, here are the links…
- Knitting Pattern for Classic Ripple Baby Afghan
- 5 Hour Knit Baby Sweater - A Little Smaller! - The Make Your Own Zone

It's not too late to join our 'Make a Hat for a Preemie' campaign, you can find details of how you can take part and help provide woolly knits for babies in the neonatal unit here.