It’s time to reveal the first recipients of our Best Buddy Sibling Award! 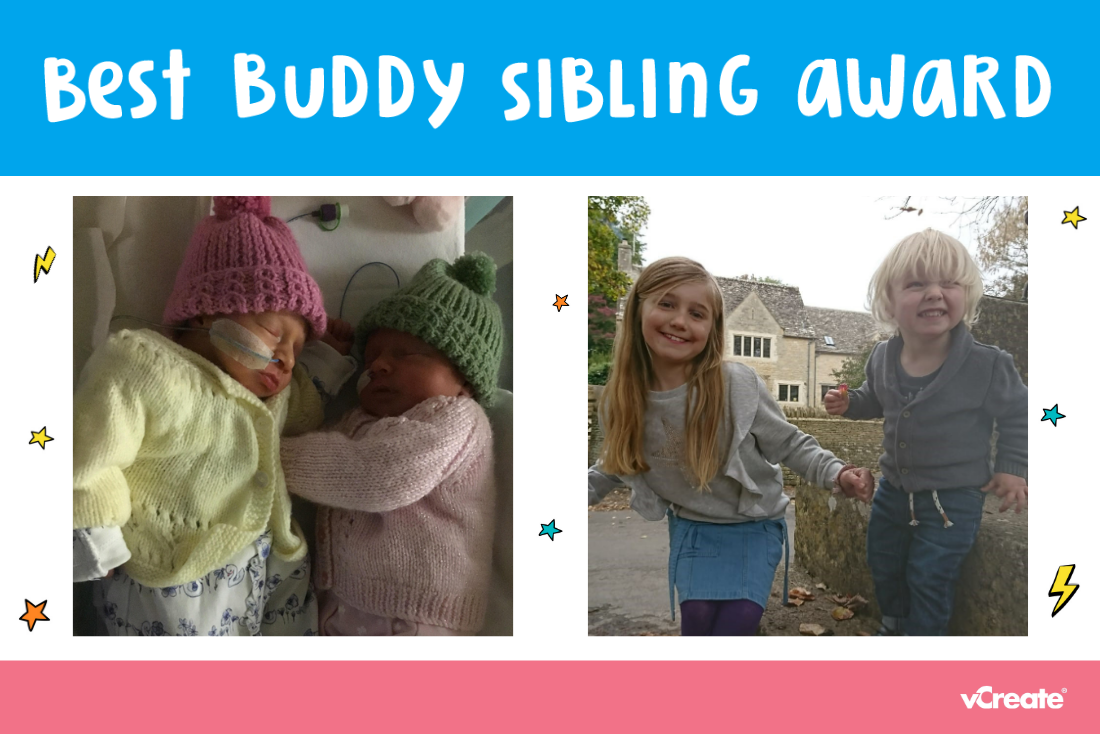 "Inspiring, brave, kind, caring and supportive." Hannah chose these words to describe the super siblings in her life.

The idea for our new award, which aims to celebrate all those super siblings out there, came from Hannah Webb. Hannah's twin girls, Millie and Freya, have received care in both the Neonatal Intensive Care Unit and Paediatric Intensive Care Unit at John Radcliffe Hospital in this first year of their little lives. We came to know Hannah after she nominated one of her girls' nurses, Savitha Ramesh, for our PICU Superstar Award.

She recently got in touch again to see if there was a way to help recognise just how fantastically brave her two elder children had been whilst their younger siblings spent their first weeks in the hospital, and so our Best Buddy Sibling Award was born! As this was Hannah's fabulous idea, her nomination is of course the first to be shared. Hannah has nominated Hollie (9) and Alfie (2.5).

"As Hollie and Alfie's mum perhaps I am a little biased, however that should not take away from the fact that they deserve recognition for their own bravery during an incredibly challenging and emotional time for our family. On it's own, being pregnant with multiples while trying to also care for older children was a new experience for us, and towards the end of the pregnancy, Hollie and Alfie had to adapt to me being a lot less hands on and unable to do the things I usually would do.

For us, having a high risk pregnancy and premature delivery meant that normality was not going to be resumed very quickly, but to be discharged from neonatal care and then a few days later have the twins readmitted to PICU and placed on life support, was a hugely emotional and traumatic experience. Particularly so for Hollie and Alfie who went out one day with their new siblings at home, only to return with the twins and mummy not there.

I spent the entirety of the twins' stay in PICU housed in Ronald McDonald, seeing the older two only a handful of times and relying heavily on video calling. The kids' dad was making the trip to and from the hospital daily and family and friends all chipped in to help look after Hollie and Alfie. These two took everything completely in their stride. They remained in school and nursery throughout, were positive and a really grounding force for us as parents.

Both visited the girls in the intensive care unit, an experience not many adults can handle, and they dealt with it admirably! Hollie was with me the night the girls were transferred to the ward and going to see them together in the morning was an unforgettable experience. Thank you for being so incredible Hollie and Alfie, most of all, thank you for being you."

Congratulations to Hollie and Alfie, you certainly are super siblings! A happy birthday is also in order for Hollie, who just turned 9 and also Freya and Millie who have just turned the big one! You've come a long way little ladies.

Our Best Buddy Sibling Award
Read all about our new award here and let us know if there is a super special sibling in your life who you would like to make a big fuss of.